Imagine having the disposable income to part with almost R1.4m in a single transaction for nothing more than fermented nectar, or booze.

That’s not entirely true; two platters of food to the value of R1,200 can also be seen on a receipt dated 8 January that has surfaced from nightspot 012 Lifestyle Brooklyn in Pretoria. How do you rack up a tab like that and which wealthy benefactor picked up the bill? A self-proclaimed prophet from neighbouring Zimbabwe, Passion Java.

I’m guessing it is no coincidence prophets and profits sound exactly the same. One quite often follows the other. There’s a lot of money to be made in the ministry in South Africa. And, if a church is designated a public benefit organisation (PBO) by SARS, then tithes are tax-exempt.

There’s certainly no shortage of self-proclaimed prophets this side of the Limpopo River but I’ll admit, it’s the first time I’ve heard about Java. He’s a big deal apparently. In fact, he was rated the most influential Zimbabwean last year according to the Zimbabwe Voice publication.

What’s got the flamboyant and philanthropic man of the cloth into the headlines in South Africa is his splurge at the nightclub, apparently for a friend’s birthday. 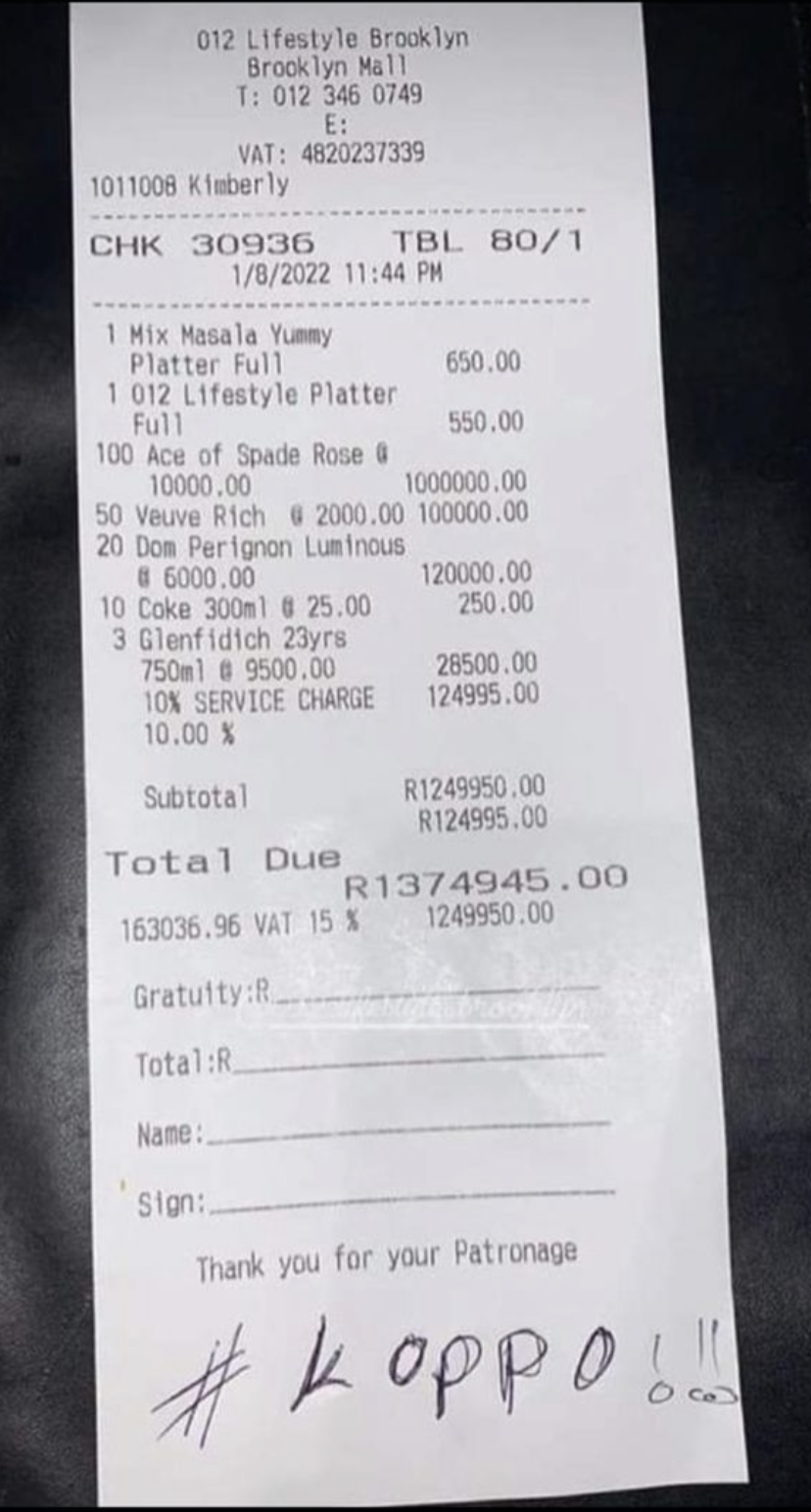 According to South African wine personality, Carrie Adams, who has spent her life in the alcohol industry, a cursory glance at the bill leaves a lot of questions.

“The first is, this is clearly not a quiet birthday dinner for two. The food bill was R1,200 [clearly not big eaters], and the booze bill was R1.2 million. One hundred bottles of Ace of Spades Rosé (better known as Armand de Brignac) equates to roughly 600 glasses … if you were drinking it (and not pouring it on the floor).

“Similarly, 50 bottles of Veuve Clicquot Rich would equate to 300 glasses. And 20 bottles of Dom Perignon would give you 120 glasses. This would all be fine if any of these products were currently available for sale in South Africa. To the best of my knowledge, all three products are not available from the supplier as we speak.

“Social media privacy apart, it does seem like overtly vulgar consumerism on display. It’s a disturbing message being sent by a man of the cloth. I’m not entirely sure what Madame Clicquot’s thoughts on this might have been,” says Adams.

Some clips from the R1,3 Million bill @012_Lifestyle Brooklyn Pretoria bought by Prophet Passion Java celebrating one of his friends’ birthdays pic.twitter.com/UCcNCUzQx8

The wine expert says those products are made with love, care, craft and intellect and, at the very least, should be consumed and not used as shower water.

Java’s income – on the face of it, at least – is derived from his church, a television channel he owns, and his music label, PJ Records. One can only assume that business is booming at an evangelical rate. On Java’s Instagram profile, he has a number of images and inspirational quotes. One such pearler is: “Your degree is just a piece of paper. Your education is seen in your behaviour.”

Let’s analyse that behaviour and ponder a few examples of what that money could have bought or paid for:

The ‘Prophet’ did not respond to requests for an interview. The establishment in question – which, no doubt, wishes parties of this kind took place weekly – couldn’t be reached for comment.